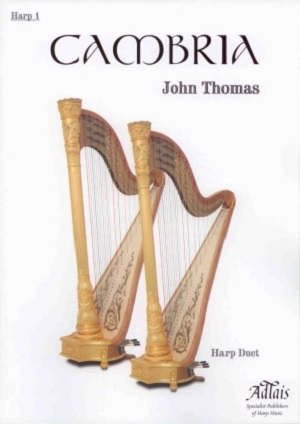 Cambria is the second of John Thomas's duets based on Welsh Melodies, the first being Scenes of Childhood. 'Scenes of Childhood' received its first performance in a concert of Welsh Music held at London's Crystal Palace in July 1862. The harpists were John Thomas himself, and Frederick Chatterton, harpist to Her Majesty Queen Victoria, and Thomas's former professor at the Royal Academy of Music. The great success of this arrangement led to the composition of another in the same genre, premiered at London's St James's Hall on 'St David's Eve' (28 February), 1863.

The manuscript is held at the National Library of Wales, where its original uninspiring title 'Scenes of Childhood 2' can be seen to have been crossed out by the composer, to be replaced by the infinitely more evocative 'Cambria', the name by which this jewel of the harp duo repertoire has been known ever since.

The Welsh Melodies used in this arrangement are Y Gadlys (The Camp), Y Ferch o'r Scêr (The Maid of Sker), and Tros y Garreg (Over the Stone).