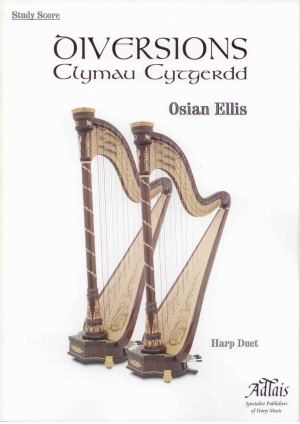 Diversions (Clymau Cytgerdd) for two harps were commission by the Bangor (North Wales) Committee of Cymdeithas Cerdd Dant as a test piece for its annual competitive festival held at Bangor in 1990.

1. Chasing (Chwarae Mig)
A 'happy-go-lucky', somewhat quirky movement, with the two harps, in quite distant keys, pursuing each other, as if they were playing 'tag' or 'hide-and-seek'. They eventually collide into each other on the last note of the piece.

2. Descanting (Canu Penillion)
The second movement is based on the unique traditional Welsh art of penillion singing, or Cerdd Dant in which the harpist plays a harmonized melody and a singer (datgeiniad) sets verses in counterpoint (or descant) with the harp. Here the second harp plays the melody (Cainc y Gododdin an original composition by Osian Ellis himself, written in the tradition of the cerdd dant melodies used by Welsh harpists from time immemorial), and the first harp plays the descant as a setting without words. The original words set to this tune by Osian Ellis were Dylan Thomas's poem 'And death shall have no dominion'. This movement is often played separately.

3. Gossiping (Hel Straeon)
Osian Ellis dedicates this movement “with affection, to all my colleagues, both young and old”. Again playing in different keys, the two harps indulge in light-hearted chatter, banter and gossip, tossing nonchalant conversational phrases back and fore from one to the other, but eventually coming together in agreement and a conclusion on a final F major chord.