Say Something is an original song by the American duo A Great Big World. The lyrics are about letting go when a relationship ends. It became an international hit when Christina Aguilera joined A Great Big World on a re-recorded version in 2013.

Sylvia Woods has made a 4-page advanced beginner to intermediate arrangement, playable on either lever or pedal harp. This music features a pedal point (also called a pedal note or pedal tone), which is a sustained or continually repeated note that is held constant while harmonies change in other parts. A pedal point is usually found in the bass, but here it is in the middle register. Virtually every measure includes a middle C note on the downbeat. Sometimes it is played with the right hand, and at other times with the left. But it is almost always there. This pedal point harmony is what originally drew me into this beautiful piece of music the first time I heard it on the radio.

The music is in the key of C, and no sharping levers are required, as there are no lever changes. Fingerings, lyrics and chord symbols are included.

The harp range required is 24 strings from a low C up to an E. It can be played on 24-string to 26-string harps with a C as the lowest string if you play both hands an octave higher than written. 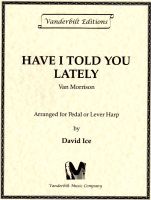